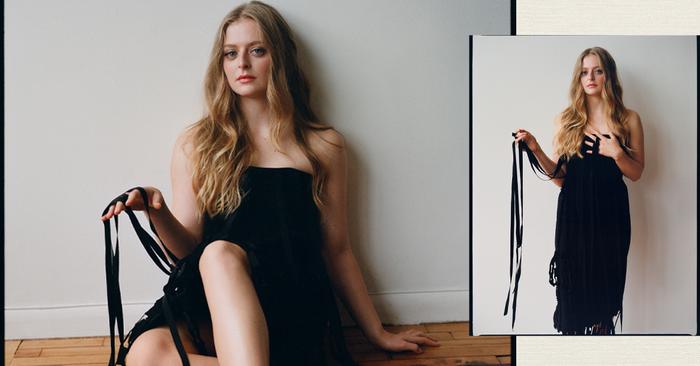 Feminist revisionism is certainly having a moment with shows like Dickinson, Bridgerton, and The Great. Why do you think these narratives resonate with audiences right now?

I think something unique about Dickinson is that it’s not just a period piece with a few modern winks. It really is a hybrid of a completely modern show and a period show. Sometimes, I will have a line that I truly have to look at and decide whether or not it’s a completely irreverent modern comment or a little historical fact from the 1850s. And often, it’s both. I think that’s how it feels to be a young person right now. We are reliving so much of our history with what’s going on politically but also interpersonally. I think we are living the consequences of dynamics that were set up hundreds of years ago, and so these stories feel so relevant to our lives. What does that say about how little society has moved forward and how much we are repeating the same problems over and over again? That’s not the most uplifting answer.

I think part of what makes Dickinson a spoonful of sugar in some ways is that Alena also plays with some of the really absurd things that are similar about the 1850s and now. Even little details keep coming up. For example, I became obsessed with this photo of the real Lavinia Dickinson with a fox. She had a pet fox and was such a cooky animal person. And then on my TikTok algorithm, I started getting all of these videos of domesticated foxes! That’s just the tiniest thing, but it’s very Dickinson-ish because I think there is something ludacris about the show, especially when it comes to the combination of the two time periods.

I heard a rumor you became so obsessed with the vintage undergarments you wear on Dickinson that you sought out similar ones on Etsy. Can you tell me a little about sourcing these pieces and how you are incorporating them into your everyday wardrobe?

The dresses are made for us on the show, but under them, a lot of the undergarments we are wearing are actual vintage pieces from the time period. I became so obsessed with corset covers, which are these cropped white blouses. They look so much like things being worn a ton now but a little bit better. They have little details, like a lot of them have the person’s initials embroidered in white so you can hardly see it or really pretty lace. I started asking the costume department where they were finding them, and they sent me the vintage stores on Etsy where they found a lot of them, and they are not expensive. Often, you can find $30 ones. They go with everything—jeans and skirts. I’ve been trying to figure out how to dress more sustainably and to think about avoiding fast fashion, and this felt like such a good solution, and it actually truly changed the way that I look for clothes. It made me realize that a lot of the things I’m seeing in stores and that are popular now are re-creations of things that are already out in the world, and there are so many feasible ways to get your hands on them.

I always joke that my ideal aesthetic is like a Victorian baby going to bed. It’s ethereal and simple, but a lot of [those pieces] are made with really sturdy and great quality cotton. It jumped out at me because so much about the show is how we are reliving history, and it opened my eyes to how cyclical fashion is. I’ll see someone on the streets wearing something exactly like it, but it’s from H&M or ASOS. It is also fun to feel like you are wearing something that has had a life before you and a little bit of history.

10 Key Items to Look On Trend This Summer