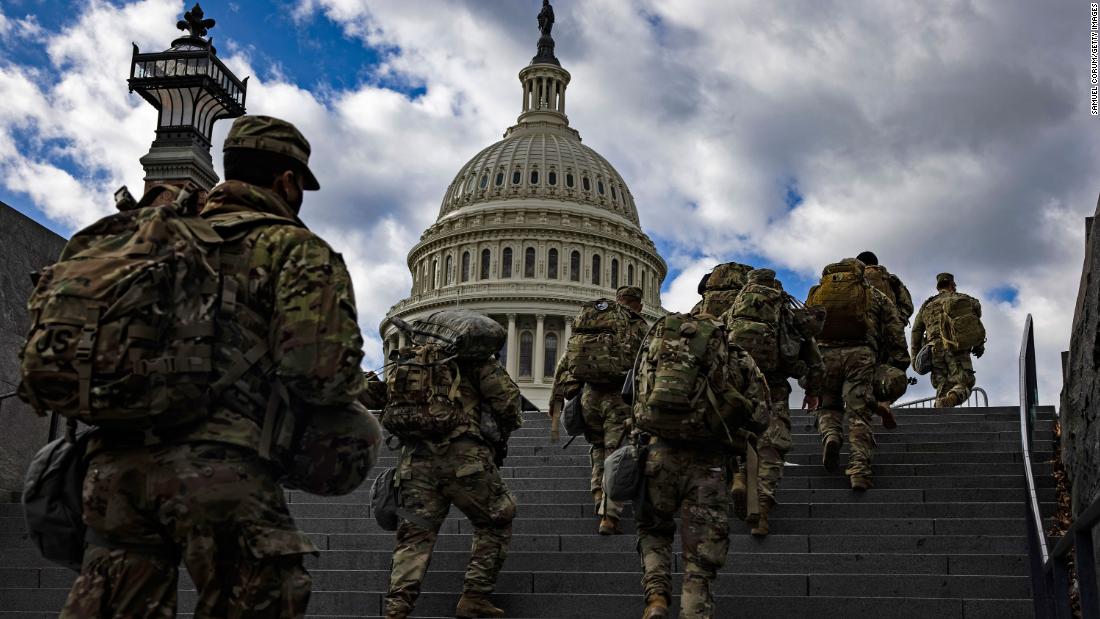 The enhanced screening measures come as thousands of National Guard members are patrolling the streets of the nation’s capital ahead of Inauguration Day.

“What happens is they’re screened before they leave their state and what it is is a credentialing process so they’re screened and they’re repeatedly screened until they are actually put on the street,” Major General William Walker told ABC’s “Good Morning America.”

Walker did not say that the screening included specific questions about the members’ beliefs surrounding the legitimacy of the election, but they are carrying out enhanced background screening.

“No, it’s all about the background. So, a regular background check is enhanced with more screening, more details and it’s layered so the FBI is part of it, the Secret Service is part of it and once they are certain that there’s no insider threat then that soldier, guardsman or airman is given a credential,” he said.

Walker stressed that members of National Guard are screened upon their entry to the service and this is another layer.

CNN has previously reported that the US Army is working with the Secret Service to determine if there are soldiers who will be part of the National Guard contingent providing security at the inauguration who require additional background screening.

The DC National Guard is also providing additional training to service members as they arrive in the nation’s capital that if they see or hear something that is not appropriate, they should report it to their chain of command,” an Army spokesperson said in a written statement to CNN last week.

“There is no place for extremism in the military and we will investigate each report individually and take appropriate action,” the statement said.

“The Army is committed to working closely with the FBI as they identify people who participated in the violent attack on the Capitol to determine if the individuals have any connection to the Army,” the statement said while adding that any type of activity that “involves violence, civil disobedience, or a breach of peace,” may be punishable under the Uniform Code of Military Justice or under state and federal law.

Current Defense Department policy requires all service members be trained annually under a program that requires department personnel to report “any information regarding known or suspected extremist behavior that could be a threat to the department or the United States,” the statement said.

The vetting comes as new details have emerged linking a rioter involved in the January 6 US Capitol insurrection to the US military.

Among those charged in connection with the riot so far is an Army reservist who federal investigators say has security-level security clearance and a long record of posting his extremist views online.

Federal investigators said the Army reservist — Timothy Hale-Cusanelli, of Colts Neck, New Jersey — was described by an informant as “an avowed White supremacist and Nazi sympathizer,” according to court documents.

The court documents also say, in a phone call with the informant on Thursday that was recorded by law enforcement, Hale-Cusanelli can be heard saying that he encouraged members of the mob to “advance” through the Capitol and gave directions “via both voice and hand signals.” It’s not clear if he’s been arrested.

Efforts to find and eliminate extremism within the military’s ranks, particularly among those who espouse White supremacist beliefs, began long before this month’s riot at the Capitol but have taken on increased urgency in the days since.

Extremist groups, including White supremacists, place a premium on recruiting current and former members of the military, a senior defense official said last week, while also trying to get their group’s extremist members into the armed forces. The groups want the experience and expertise of the military.

“We know that some groups attempt to actively recruit our personnel into their cause, or actually encourage their members to join the military for purposes of acquiring skills and experience,” the senior defense official said. “We recognize those skills are prized by some of these groups not only for the capability it offers them, but it also brings legitimacy to them in their mind for their cause.”

CNN’s Barbara Starr and Jamie Crawford contributed to this report.