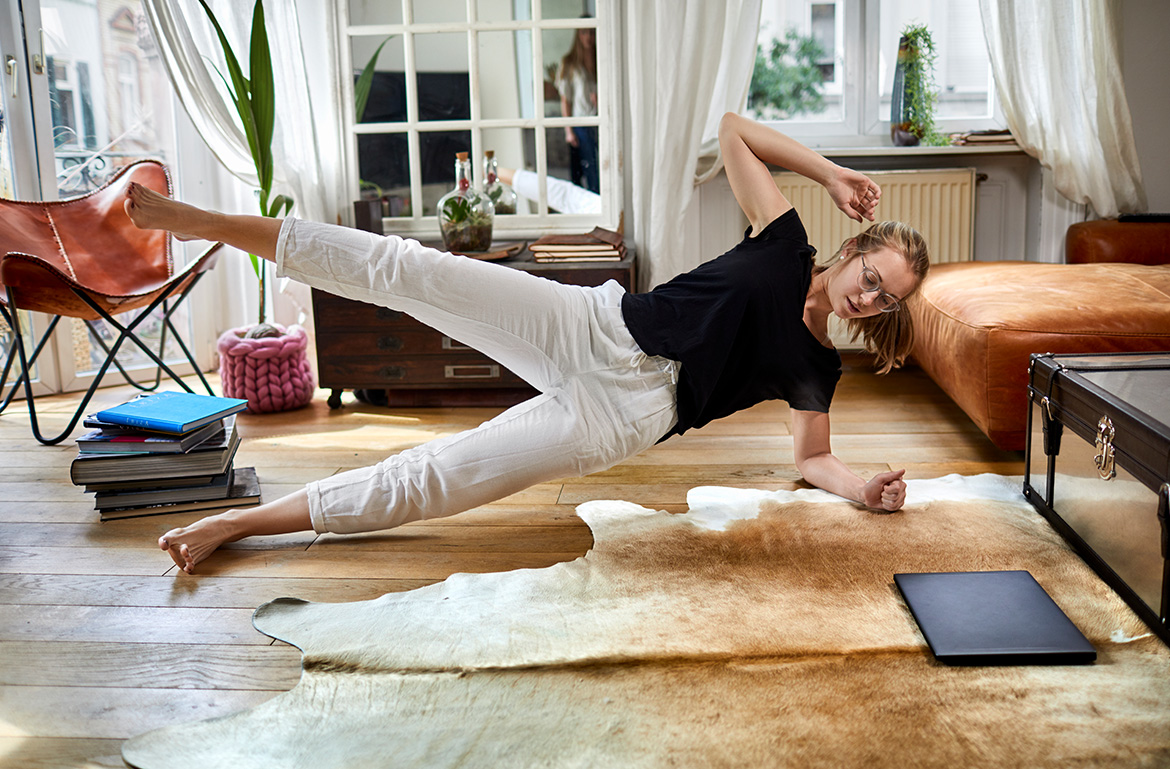 Michael Hornig, a New York City fitness instructor, is used to waking up early. Before the pandemic, his alarm would blast at 4 a.m., a cruel yet familiar wake-up time. By 5:30 a.m., he’d be teaching his first class in Manhattan, about an hour-long commute from his home. The rest of his day would be packed with studio classes—he’d hop around the city to teach at several SLT, Flywheel, and F45 studios—and private training sessions with clients. It was a grind that many trainers in New York City could relate to. But last spring everything changed.

The COVID-19 pandemic has shut down thousands of fitness studios and gyms, and many national chains, including Flywheel Sports and 24 Hour Fitness, have had to file for bankruptcy. Some businesses have stayed afloat thanks to virtual streaming, outdoor workouts, and private training—or by offering a combination of all three to clients—but many more could not. About 15 percent of all studios and gyms had closed for good as of September 30, 2020, according to the International Health, Racquet & Sportsclub Association (IHRSA). And thanks to the shutdowns and closures, the health and fitness industry has lost about 480,000 jobs.

These days, Hornig’s commute is much shorter: the distance between his bed and his computer. He rolls out of bed at 7:30 a.m. to teach an 8 a.m. class that he developed himself and streams on Zoom. To some, that might sound like a luxury. To trainers like Hornig, it’s survival. In a shifting fitness industry that was (and remains) largely shuttered, Hornig is not the only trainer flexing new muscles to make ends meet.

When the fitness industry shifted from brick-and-mortar gyms and studios to online streaming workouts, many of the star trainers who helped make boutique-fitness brands popular ventured into new territory to make ends meet. After working in fitness for five years, Jason Ostrander, an SLT trainer who also worked in development for the company’s corporate office, had garnered a loyal client base. When he was laid off in the spring, he started training private clients via Zoom. Then he and Hornig, who is his partner, started JM Fitness. “We didn’t know where we were going and what was happening, so we were trying to hold on to everything that we had just to see where the wave would take us,” he explains. Although SLT re-hired Ostrander to work on talent development last summer, he and Hornig continue to build their brand and train clients online, and they’re also filming content for the Cure.fit app.

Amanda Jenny, a 10-year veteran in the fitness industry, has taught Pilates, TRX, HIIT, and dance. At the onset of the pandemic, she was teaching 17 classes a week at SLT as a master trainer and worked on the corporate side in training and development as an independent contractor. Last March, the company canceled its in-person classes, so Jenny started teaching her own classes online. “When I decided to go virtual and to teach on my own, it was less of ‘this is an opportunity to go out on my own’ and more, ‘I miss my people and I want to see them and they want to work out,’” she says. She taught solo classes virtually, launching her own on-demand workout platform and building a website, and when SLT started offering online classes, she taught there as well.

Then, in July, a recruiter approached her about working for Bande, a new streaming platform that wanted to put the focus on community by keeping virtual fitness classes small and intimate. “That was my vision, and everything I had been trying to build on my own, and the way that she spoke about it, it just seemed like it was going to be done on an elevated level that I could have never achieved on my own,” Jenny says. She auditioned and was hired full-time as a founding trainer, a position with came with benefits, something she’d never had as an independent contractor. Because of her full-time status, she no longer teaches with other brands or on her own. “I was sad to leave SLT because I had been with them for five years, but I really feel like virtual is the future of fitness,”  she says.

For up-and-coming trainers, the options are bleaker than they are for established trainers like Ostrander and Jenny. Hornig, who had only been working in the industry seven months when the pandemic hit, explains that many companies look at a trainer’s client retention rate during their first year and use that data to decide on promotions. “My entire first year got postponed due to the pandemic. When you’re new and you’re in New York City, one of the most competitive cities for fitness jobs, it takes a year to build a following. There’s no one who is suddenly a sensation with sold-out classes,” Hornig says.

That leaves lesser-known trainers who don’t have large followings in a hard position. Horning was able to work with Ostrander, a veteran, and build JM Fitness, but many other new trainers haven’t been as lucky. “If anyone is leaving the industry, it’s new instructors that didn’t really have a following and have no way to monetize their platforms,” says Alexandra Bonnetti, founder of Talent Hack.

Other trainers and owners of small fitness studios have pivoted to new business areas while their physical spaces remain closed. When Holly Roser, a San Francisco-based personal trainer and owner of the Holly Roser Fitness Studio, was forced to close her studio in March, she launched Renew Meals, a delivery service for customized plant-based meals. Now, she’s able to offer a 360-degree approach to wellness. “When clients come to me, not only do I have their fitness covered, but I also can give them meal plans,” she says. The idea had always been in the back of her mind, but the pandemic put the business on a fast track. Within a matter of months, she hired chefs and a team to launch the nutrition business, which delivers in the San Francisco area and ships across the country.

A power shift years in the making

So, what happens next for studios and trainers? The future is uncertain, but industry insiders like Bonetti say there’s been a power shift. For the first time in the past 10 years of the boutique fitness boom, the power is back in the hands of the trainers. They don’t need to be tied to a well-known brand to succeed. Now, trainers with a loyal following, a phone, and maybe a platform to stream on, can build their own fitness empires. “If you’re savvy, and you put in the effort in terms of figuring out your brand, the content, and the marketing acquisition side, you can stand up an entire business with a camera and some quality time,” says Anthony Vennare, co-founder of Fitt Insider.

Companies like Core (Vennare works with Core in an advisory role) and Playbook are setting out to equip fitness trainers with the tools and software to create profitable digital fitness platforms for their personal brands, without the middleman they previously relied on from studios and brands, notes Vennare. This year, Bonetti launched SPACES by Talent Hack, which “grants wellness professionals access to the same type of software that studios and major gyms use to manage their businesses, uniquely designed for the solopreneur,” according to a press release from the brand.

In an industry that is only as good as its talent (i.e. the trainers) what’s next is what Vennare says is a reckoning that was years in the making. “You can build software and you can build a brand, but what’s going to carry your brand is the instructor or coach and trainer. A lot of these individuals got left behind because the studios were trying to make money and make their own way. And I think that was a huge mistake because now we’ve seen, they are the power, they always have been, but they just were undervalued,” says Vennare. “Fitness trainers are finally getting paid their worth. They’re the ones that are leading the industry forward, and I think that sticks long beyond COVID-19,” says Vennare.

This industry power shift had already started with the social media boom in recent years, and was accelerated by the pandemic, according to Bonetti. “Pre-Instagram, our instructors were under your brand and they taught your clients and they had no way of really connecting with or contacting the client. Today, 10 years later, people have direct DM contact with every single client. As technology evolves, that relationship is owned more and more by the trainer. So that’s the most important shift that has happened in the past 10 years and it continues to accelerate,” says Bonnetti.

Katy Neville, head of Strategic Brand Partnerships and Programming at Cure.Fit, and a fitness industry veteran who’s worked in training and business development for fitness brands like SLT and Pure Barre, echoes this shift adding, “The good talent will go where they are valued. Not everyone is made to build their own business. So many trainers just want to teach, be appreciated, and create a community. The digital platforms that succeed will need to be trainer-focused, community-focused,” says Neville. And studios, in a real way, will have new competition.

While more studios and brands are expected to fold as the pandemic drags on, what we know is that your favorite fitness trainers aren’t going anywhere. In fact, they’re entering a new landscape that allows them to call the shots, (finally) get paid their worth, and create on their own like never before. Some fitness brands will sweat over that, but the more tech-forward-looking brands will bank on it.

Oh hi! You look like someone who loves free workouts, discounts for cult-fave wellness brands, and exclusive Well+Good content. Sign up for Well+, our online community of wellness insiders, and unlock your rewards instantly.