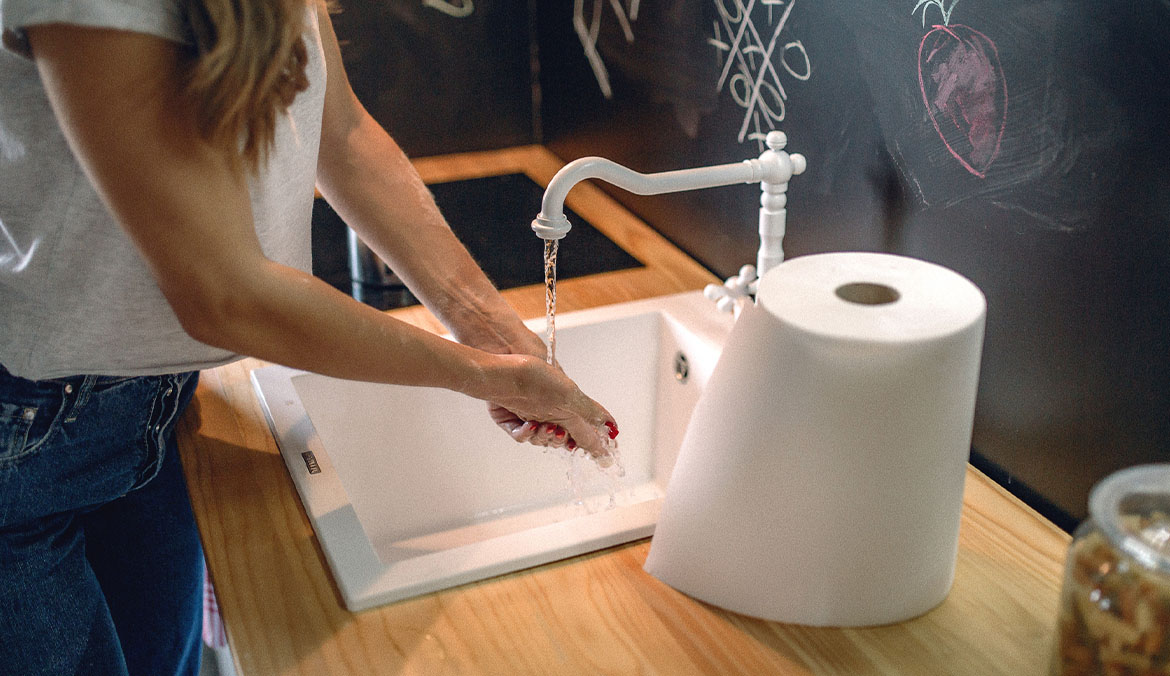 Let’s play a guessing game: What do you think is one of the dirtiest objects in your house? Toilet seat? Bathroom doorknob? Old, smelly sneakers? The pretty patterned hand towels adorning your oven?

If you didn’t guess the hand towels, you’d be wrong (no matter how cute and seasonal they are). According to microbiologist Charles Gerba, PhD, used hand and bath towels are some of the most offending hosts of bacteria—even if they don’t look as ratty as, say, your old sneakers.

“These are among the [most bacteria-riddled] items in the household,” Dr. Gerba says. “After three days of use, almost all contain fecal bacteria. It is also difficult to remove [the bacteria] during normal washing because they are so thick.”

Fecal bacteria in the kitchen? Um, no thanks. That’s why Dr. Gerba is an advocate of paper towels for household cleaning and drying.

“Towels can get contaminated with remaining bacteria on your hands, and it can survive or grow in the towels, contaminating the next person who uses them,” Dr. Gerba says. “That is why paper towels [not communal towels] are always used in public restrooms.”

If the idea that a public restroom might be cleaner than your home doesn’t sit right with you, keep reading for a microbiologist’s take on why making the switch to paper towels like Bounty® might be the right move.

Scroll down for 3 reasons paper towels are a sanitary choice to have on hand.

1. They can help prevent cross contamination

When you wipe down your kitchen counters with that used dishrag that lives in the sink, you might actually be spreading bacteria around—aka, cross contamination—even though your intention is to clean up.

“Bacteria that cause food-borne illness can occur in [used kitchen and] bath towels,” Dr. Gerba says. “[Using paper towels can] prevent the bacteria grown in these items from contaminating surfaces when you clean them.”

Plus, Dr. Gerba says you should wash your hands every time you re-use a cloth towel because they can contaminate your hands and start the whole cross-contamination cycle over again… which sort of defeats the purpose of washing your hands if you’re drying them on a used cloth towel.

2. Convenience for the win

Let’s be honest, you can’t beat the convenience of paper towels. And since Bounty paper towels are twice as absorbent as the leading ordinary paper towel brand (with a cloth-like durability) they allow you to clean up messes with fewer sheets. So when you consider the time, energy, and resources required to wash a reusable dishcloth after every use, you’re really saving yourself a lot more than you might realize.

Remember those hand towels hanging from your oven? It might not be the best idea to keep them so close to areas where you’re handling food, according to Dr. Gerba.

“You can contaminate the area where you store [kitchen towels],” Dr. Gerba says. “People often hang used towels on refrigerator door handles or other locations, which can contaminate these surfaces. It’s one reason we found why refrigerator door handles and sink faucets had fecal bacteria on them.” That paper towel stand sitting on your counter has never looked so good.