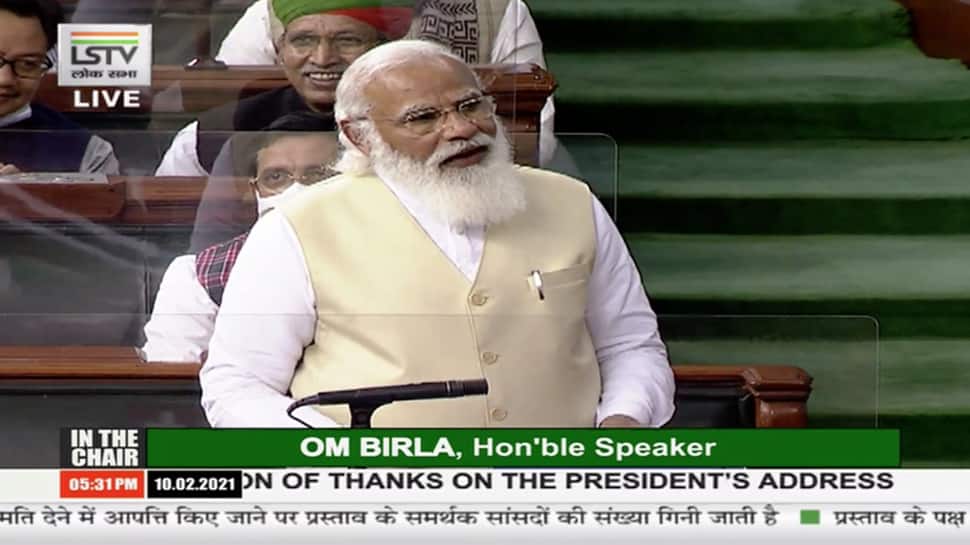 The government and Parliament have great respect for farmers who are voicing their views on the three farm bills, Prime Minister Narendra Modi said on Wednesday and made it clear that those who want to continue with the old agriculture marketing system can continue doing so.

During his over 90-minute address, the Prime Minister slammed the Congress as a “divided and confused party” for its different stands in Lok Sabha and Rajya Sabha on the debate. The Congress walked out of Lok Sabha as PM Modi explained the government’s stand on the three farm laws.

Here are the top points from PM Modi’s speech in Lok Sabha:

* Replying in Lok Sabha to the discussion on the motion of thanks to the President’s address to the joint sitting of Parliament, PM Modi staunchly defended the three contentious farms laws and attacked the opposition for “misleading” farmers, saying those who are disrupting the House are doing so as per a “well-planned strategy” as they are unable to digest that people can see the truth. “Through their games, the trust of the people can never be won,” he said, amidst protests by the opposition members.

* Seeking to allay apprehensions on the farm laws, PM Modi said neither any agriculture ‘mandi’ (market) has shut down after the three laws were enacted nor has the MSP stopped, rather the MSP has only increased which no one can deny. The Prime Minister also said the government has offered to discuss clause by clause of the three farm laws and if there are any shortcomings it was ready to make changes.

* “This House, our government and we all respect farmers who are voicing their views on the farm bills. This is the reason why topmost ministers of the government are constantly talking to them. There is great respect for farmers. “After the laws relating to agriculture were passed by Parliament, no ‘mandi’ has shut. Likewise, MSP has remained. Procurement on MSP has remained. These facts can’t be ignored,” he said.

* PM Modi said the Congress has taken different stands in Lok Sabha and Rajya Sabha. “A divided and confused party like this can do no good to the country,” he said. He said the old agriculture marketing system will continue and those who don’t want the new system can continue with the old system.

* “Our farmer should become self-reliant, he should get the freedom to sell his produce. There is a need to work in that direction,” he said, adding agriculture has been a part of India’s culture and the festivals have all been associated with planting and reaping of crops. Noting that the kind of investment farming needs was not happening, PM Modi said there is a need to bring investment and modernise agriculture to empower the sector.

* “I am surprised for the first time a new argument has come –we did not ask, so why did you give. Be it issue of dowry or triple talaq, no one had demanded laws to deal with them, but the laws were made as they were necessary for a progressive society,” he said. The Prime Minister said the NDA government has tried everything to bring changes in the country and asserted that “if the intention is good, then the results will also be good”.

* Referring to the COVID-19 pandemic, PM Modi said India has managed the crisis successfully despite adverse predictions and the country has now become a ray of hope for the world. He said the world post-COVID19 is turning out to be very different and in such times remaining isolated from the global trends will be counter-productive. “That is why India is working towards building an ‘Aatmanirbhar Bharat’ (self-reliant India), which seeks to further global good.

* “Predictions were made India cannot survive as a nation, but people of our country proved them wrong and we are now a ray of hope for the world,” he said. Complimenting healthcare and frontline workers for their relentless work during the pandemic, the Prime Minister said the way India has managed the coronavirus crisis is a turning point and the world has seen its success.

* The address of the President has showcased India’s ‘Sankalp Shakti’ and his words have boosted the spirit of confidence among the people of India, infused new confidence and inspired every heart “During the discussion on the President’s speech, a large number of women MPs took part. This is a great sign. I want to congratulate the women MPs who enriched the House proceedings with their thoughts,” he said.

Taapsee Pannu hits out at Kangana Ranaut, quips if being ‘toxic’ is in her DNA

Foreign cigarettes worth Rs 20 lakh seized by DRI in Bhopal

More than 3.5 million in UK have been vaccinated