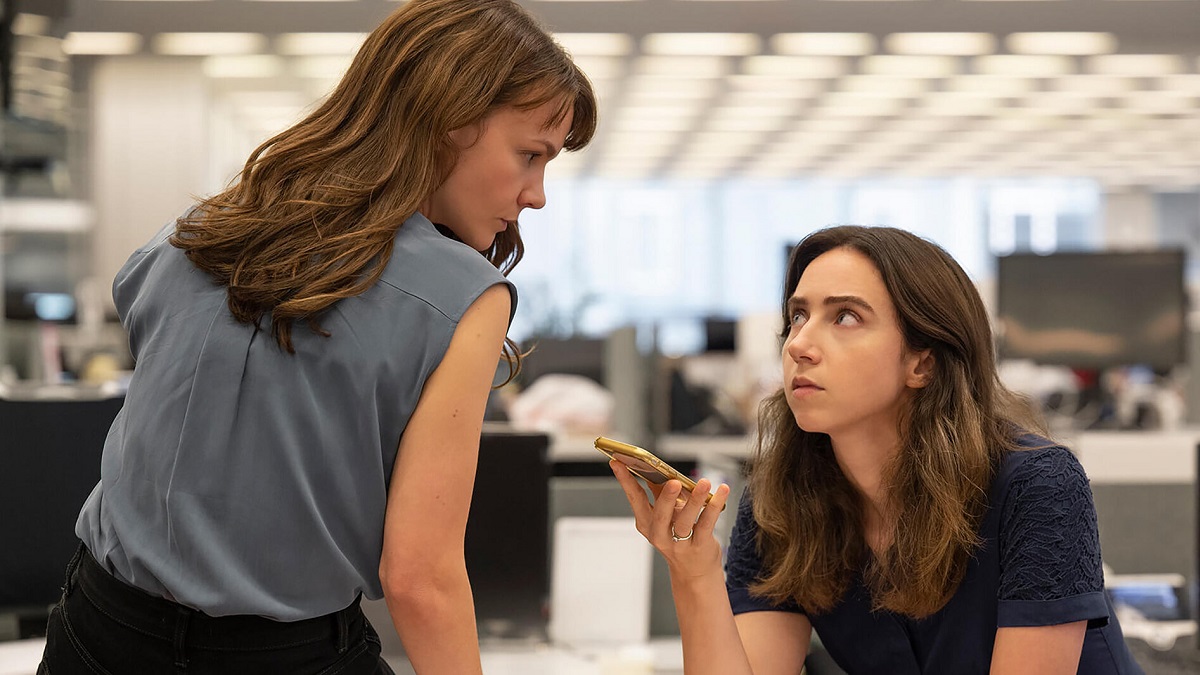 In 2017, The New York Times and The New Yorker finally gave a voice to the women who were sexually abused, belittled, and silenced by Harvey Weinstein and his machine of henchmen across four decades. In an industry that had upheld, protected, and even celebrated, this deranged behavior from its ranks of powerful men, speaking out was either useless or downright dangerous. She Said is a movie about one of the few times it worked.

She Said is a biographical drama adaptation of the homonymous book by Jodi Kantor (played by Zoe Kazan) and Megan Twohey (played by Carey Mulligan) about the process behind The New York Times‘ breaking story that finally led to Weinstein’s demise after decades of wrongdoing. It highlights the two reporters’ diligent work with all the victims, the powers involved, as well as their unwavering determination to finish the piece despite the expected challenges that emerged along the way. It’s a movie that checks all the marks regarding the treatment a matter of this kind warrants, despite a number of shortcomings that affect its cinematic value.

Directed by Unorthodox‘s Maria Schrader and written by Disobedience‘s Rebecca Lenkiewicz, She Said is an incredibly important piece of film in the story it chooses to tell, as well as the way it chooses to tell it. However, it becomes clear as the movie progresses that Schrader and Lenkiewicz couldn’t quite shake off the shackles of the investigative journalism format that originated it, as She Said doesn’t quite succeed in building narrative tension, intrigue, or managing the type of dynamics that set the art of cinema apart from the art of reporting.

After a strong opening that teases future developments in the story through the use of flashback, as well as the introduction of Twohey through her work unearthing Donald Trump’s sexual harassment scandals, She Said settles into a succession of endless phone calls, meetings, and interviews. The repetitiveness only really lets out by the third, and arguably strongest, act of the film, where — despite a very ominous and distracting Weinstein stand-in whom we only ever see the back of — She Said manages to hit all the important emotional beats that were lacking throughout the rest of its duration, to culminate in a passionate and emotional, yet incredibly sensible and tasteful, ending.

The investigation is presented in as much detail as possible, which transpires as a deliberate choice by the German filmmaker, with the intent to honor every individual involved in the process. Despite the movie’s rapid scene-hopping, victims are always given the time and gravity needed to recall their experiences, enriched by flashbacks that emphasize the stupidly long amount of time that it took for the young women that they were then to get justice.

The look into Kantor and Twohey’s personal lives as they navigate motherhood, their relationship with their daughters, the physical and emotional demand of their job, and their own condition as women within a system that facilitates the actions of the likes of Weinstein is done with similar care. It is never melodramatic, but it also never shies away from important moments of vulnerability for the sake of building a “girl boss” type of forced and tropey image. Kantor and Twohey’s portrayal is effective in its depiction of their humanity, complexity, and regular lives as working women, without ever overshadowing the protagonism of the victims and the story they pursue.

She Said is miles above Bombshell in its emotional, thematic, and tonal depth, and grounded performances from Carey Mulligan and Zoe Kazan, but can’t quite nail Spotlight‘s ardent storytelling and investigative intrigue. At its worst, it’s nothing more than a dramatization of the facts, but at its best, She Said is a graceful, poignant exploration of both investigative journalism and the visceral pain and quiet resolute that comes with challenging the very roots of the institutions that have continuously reduced women to their sexual faculties.

On an extra-diegetic note, it’s unfortunate that Brad Pitt is one of She Said‘s producers, alongside Dede Gardner and Jeremy Kleiner. Pitt knew about Weinstein’s behavior as both Gwyneth Paltrow and Angelina Jolie, who were previously in relationships with the actor and who were both harassed by the producer, had told him about it.

Although Paltrow has praised Pitt for confronting Weinstein in the late 90s after his attempt to violate her, Jolie has criticized his decision to keep working with the producer after that, in movies like Inglourious Basterds and Killing Them Softly. Pitt has also been accused of physical abuse by Jolie, prior to their separation in 2016.

The Incredible Hulk Might Be Coming To Disney Plus Soon

Review: ‘They/Them’ is a swing and a miss for queer horror