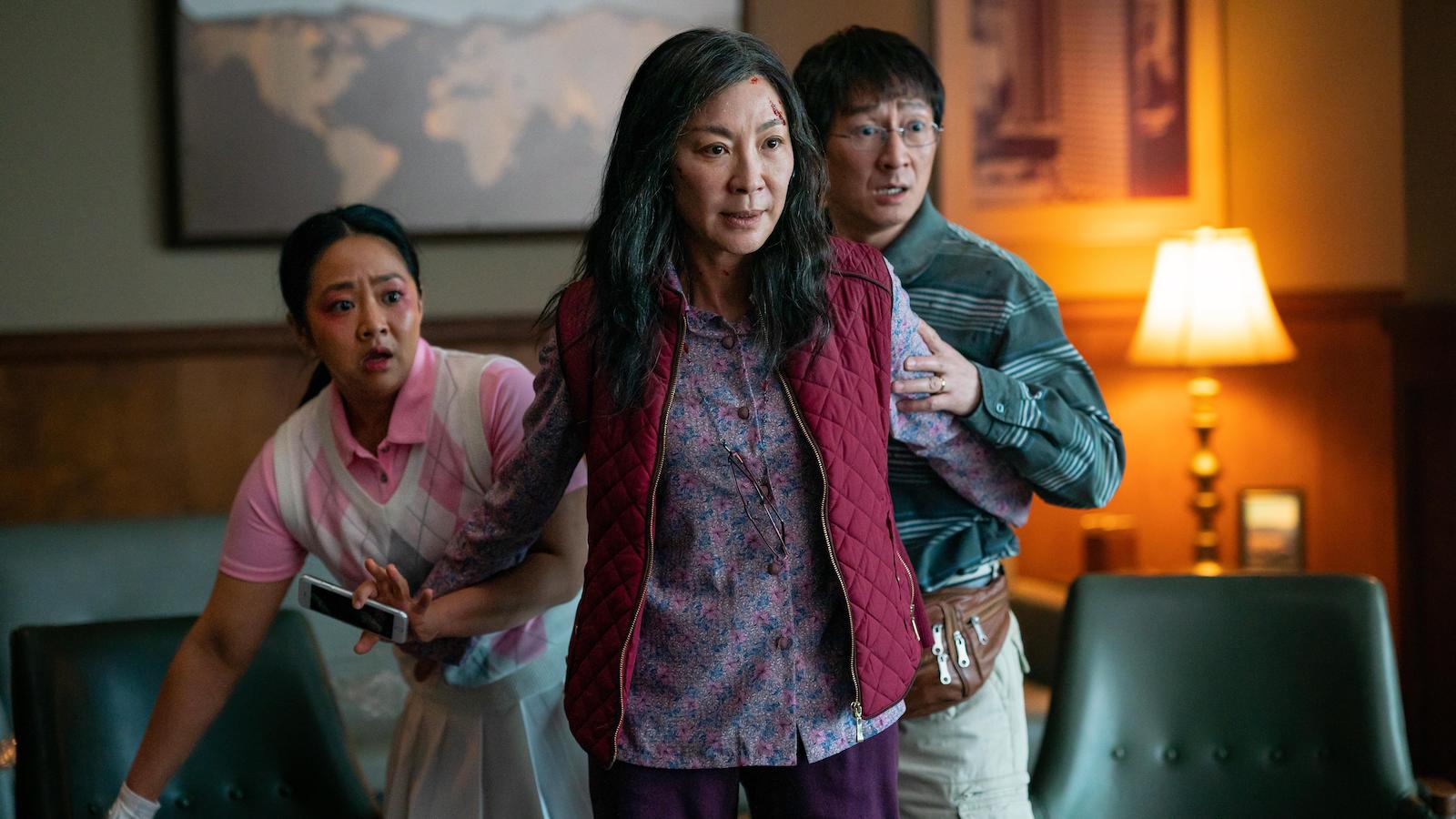 In Everything Everywhere All At Once, we follow Chinese-American laundromat owner Evelyn Wang, who is recruited to save the universe from an incoming multiversal threat. As she leans into the power and skills of her alternate self from other dimensions, she learns more about herself and her family. The chaotic genre-jumping spectacle manages to pull a wide range of elements together around a powerful emotional core, delivering a hilarious and deeply affecting two hours.

This film is built around two phenomenal performances from Michelle Yeoh as Evelyn, and Stephanie Hsu as her daughter Joy. Yeoh shows an incredible amount of range, and while we’re used to seeing her as a badass fighter in shows like Star Trek: Discovery or her many martial arts movie appearances, it’s rarer (especially in her Western work) for her to be able to show real vulnerability.

She also feels remarkably normal, in that you completely buy she’s only just about making it through life, with the biggest threat she faces being the IRS. Still, she owns the action hero moments as she embraces her newfound abilities, but it’s nonetheless a gradual process where the badassery feels earned – when she punches someone in the face, she still winces at the impact.

The counterpoint to Yeoh’s strained restraint is Hsu, who gets to be cool in a different way. As the reality-hopping shenanigans occur, she gets some incredible outfits designed by Shirley Kurata, carrying them with confidence and presence. At the same time, the moments where she’s desperately trying to connect with her mother (a distance in part caused by the family’s homophobia), are deeply emotionally affecting. The pain she exudes throughout is palpable, even just in the tone of her voice as she tries over and over to get her mother to listen.

When the pair are together on screen, it’s like all the chaos slips away, and you’re focused solely on the struggle of their strained relationship at the heart of the picture. Other performers also do great jobs, most notably Ke Huy Quan as Evelyn’s endearing, bumbling, but good-hearted husband Waymond. The combination of his performance and the script give the role a surprising amount of depth – particularly in the back half. Jamie Lee Curtis also gives a drily fun turn as a scene-stealing auditor, while the broader ensemble all play their bit-parts with just the right amount of heightened, light-hearted silliness to make it work.

Everything’s irreverent humour continues in the incredibly imaginative conception of what can be done with the boundless possibilities of infinite parallel worlds. There are very outlandish universes like the already-famous one where humans evolved to have hot dog fingers, and while this is played largely for laughs, these worlds get a deeper exploration than you would expect.

Writers and directors Daniel Kwan and Daniel Scheinert, collectively known as Daniels, additionally provide some striking homages to other works, particularly Wong Kar Wai’s sweeping romances and traditional martial arts cinema. Somehow, these wildly different styles are executed sharply by director of photography Larkin Seiple, with the aspect ratios and color grading being manipulated to make this work. It’s as if they took the lovingly-crafted pastiche style that the likes of Edgar Wright and Quentin Tarantino specialize in, but gave it a beating heart.

In spite of all the constantly-moving insanity, there’s still an impressively persistent emotional core to everything that unfolds and remains continually reinforced, particularly in relation to the lead performers. This is a film about finding love and connection when you’ve been ground down. Even the bizarre hot dog-handed world gets to have its own deep moments that will likely make you cry. At times, it can feel a little too eager to tie up its own loose ends without giving the invocation of heavier subject matter time to breathe, particularly surrounding the family’s alienation of the queer daughter. However, there’s an earnestness which means that even the oversimplified emotional beats hit hard.

Everything Everywhere All At Once understands that the world is infinitely big and scary, and that we often feel like we are the worst versions of ourselves. And yet, it manages to effectively advocate for us to keep going, to seek the connections and moments that make life worth it. From the irreverent humour to homages via several standout performances, we are reminded that in a world where it feels like nothing matters – we have to find those little moments to live for.

Peter Jackson’s Beatles Doc ‘Get Back’ Sells Out IMAX Screenings