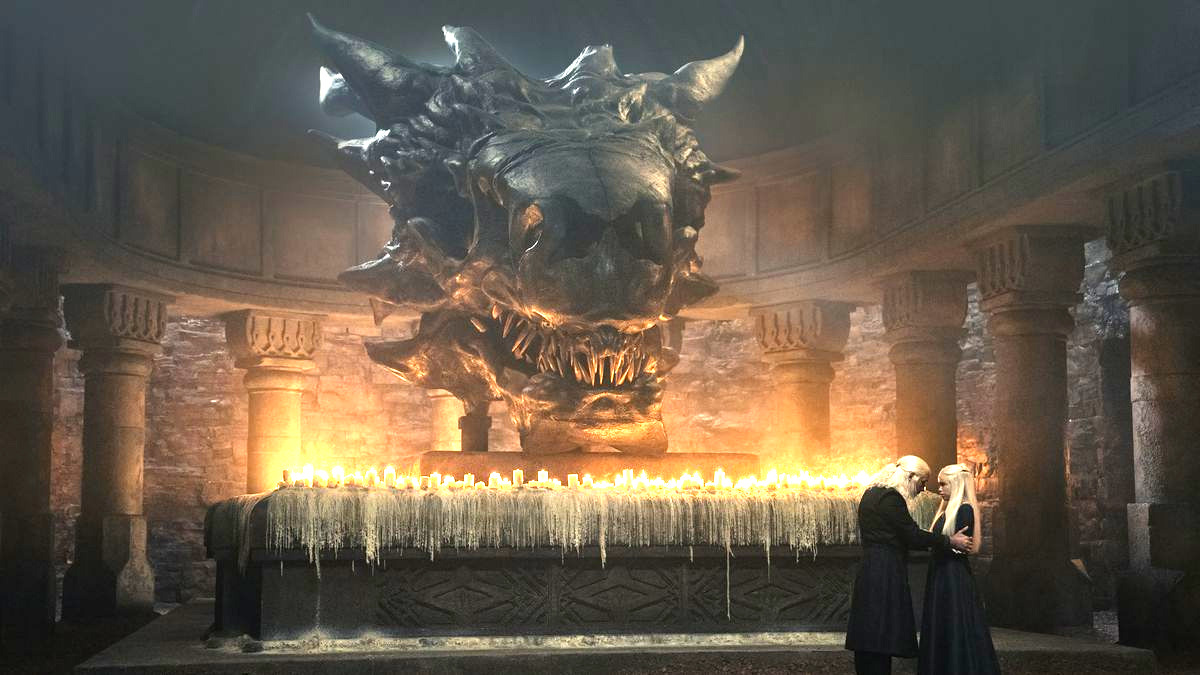 Measuring up to the final seasons of Game of Thrones isn’t a particularly high bar, so HBO’s new spinoff series House of the Dragon instead tries to imitate its predecessor’s first three runs in all the things that turned it into one of the most prominent pop culture sensations of the past decade. The big exception here being the inclusion of dragons — and a host of them, at that — although the novelty might ultimately prove insufficient in selling this off as another masterstroke.

Despite tentatively categorizing itself as an epic fantasy, A Song of Ice and Fire has always found surer footing in the nuanced world of court intrigue and political maneuvering, so much so that if it weren’t for Daenerys’ baby dragons and a few mentions of White Walkers here and there, one could almost be forgiven for thinking that they were watching a historical drama. However, serpentine creatures, strange red priestesses, and even a touch of the apocalyptic zombie horde do not a fantasy show make, and nor do they have to.

Game of Thrones became as popular as it did because of its grounding in an in-canon reality, which in turn fueled a sense of immersion that truly brought the world of Westeros to life. Controversial storytelling decisions and stray Starbucks coffee cups aside, the story of the Seven Kingdoms was more often than not about its characters and their flawed humanity, not the spectacle that people had grown to expect from such works of art; the spectacle that showrunners David Benioff and D.B. Weiss ultimately fell for when they had the means to realize it.

Which is why the very first thing House of the Dragon gets right (as opposed to the downfall of its predecessor) is understanding why people actually gave a hoot about this story in the first place. House of the Dragon has more dragons than Game of Thrones could wish for on its best day, but that hasn’t cajoled George R.R. Martin or his handpicked co-producer Ryan Condal to sacrifice compelling characterization and narrative for the sake of spectacle.

As a result, the first thing that many viewers will notice about House of the Dragon, perhaps even as early as the first 20 minutes into the first episode, is that they’re back to watching an episode of Game of Thrones — its earlier seasons, dare we add — as if not a day has passed.

Is that a good thing? Well, at the very least, it gives House of the Dragon a fighting chance, even despite certain parts of the fandom gatekeeping the story and denouncing HBO’s franchise-mongering attempt as nothing but a desperate cash grab, a last stand of sorts to keep Westeros relevant.

Beyond that, the fact that House of the Dragon adheres to the principal philosophies of Game of Thrones is a double-edged sword. Granted, the result is a show that’s as compelling to watch as the story has ever been, but at the same time, the landscape of the entertainment industry, and specifically genre productions, has changed drastically over the past couple of years.

In today’s world, audiences are in no shortage of fantasy shows with new and exciting worlds to explore. This casts a huge shadow on Westeros, which much like its Tolkienian counterpart over at Prime Video, doesn’t have a lot of novelties to offer besides what you’ve come to expect. Ultimately, the biggest thorn in House of the Dragon’s backside is the fact that when all is said and done, it’s just more of the same thing.

Now, instead of Five Kings vying to sit on the Iron Throne, we have the Targaryen dynasty at the height of their power, slowly succumbing to degradation and strife. Instead of three small dragons slowly growing up and teasing audiences with the horror that their very existence might inflict upon the world, we have them freely roaming the skies and bringing any adversary to heel as if it’s nothing out of the ordinary. In opposition to a drunk king heedless of his duties to the realm, we have an unwitting and tragic ruler who is equally as incompetent.

In short, the same old story repeating itself, the same old message reverberating through the cracks of recorded history. A tale of a kingdom where the greed of ambitious men unfetters the seemingly civilized and poignantly inevitable chaos that follows an era of peace. A world wherein you either win or die when playing the game of thrones.

Westeros and its inhabitants are showing an inclination to die on this hill. It doesn’t matter if we’re dealing with the graceful Targaryens — hailing from time immemorial and a land all but utopian — or if the subject of our artistic study is the noble Starks of Winterfell or the ferocious Baratheons of the Stormlands. In the Seven Kingdoms, history repeats itself as sure as the sun rises on the eastern horizons of the Narrow Sea and sets on the lowest points of the aptly named Sunset Sea.

Sure, there is something to be said of Martin’s effort to highlight the significance of the patriarchy in the course of history, something that translates extremely well into the television medium despite the volatile landscape of culture — with House of the Dragon representing the issue neither conspicuously and nor too elusively — but that, in and of itself isn’t enough to distinguish the show from what preceded it, especially since it isn’t something that takes the center stage of this conflict.

The narrative pace set by Martin’s Fire & Blood is another issue that stops House of the Dragon from fully conceptualizing its characters, who in the haste to push the plot forward to where it needs to go, never get the opportunity to become as profoundly depicted as their Game of Thrones counterparts a decade ago. Unlike the A Song of Ice and Fire books, which followed a conventional story structure, Fire & Blood is basically a recounting of history from the viewpoint of an Archmaester, most akin to J.R.R. Tolkien’s The Silmarillion.

Go in expecting huge time jumps, as the story has to cover broadly outlined events that take decades to unfold, unlike Game of Thrones which, in its entirety, took place in a span of several years. That’s also why some of the characters are played by different actors, with older thespians replacing them at some point in the first season when the narrative has to spring into the next block. Even Game of Thrones started off by introducing fans to a huge ensemble of characters, and it would be many episodes until most of us became acquainted with them. Unlike that series, the characters in House of the Dragon never get their moment in the spotlight, the moment that distinguishes them as individuals rather than pieces to a larger puzzle.

Unsurprisingly, the production value is sublime, setting House of the Dragon apart from many contemporary works of high fantasy (e.g., Netflix’s The Witcher, Amazon’s The Wheel of Time) in both world design and direction. The show has utilized the treasure trove of experience that a lot of crew members carried over from their time on the original series, and it shows. Game of Thrones may have dropped the ball in later seasons when it came to the story beats and character arc resolutions, but no one could accuse the HBO team of fumbling the technical facets any more than they could accuse the actors of not giving it their 100 percent, anachronistic coffee cups and water bottles notwithstanding.

The overall gloom of the world also appears to be a conscious creative decision, so there may be moments where you may feel like you’re watching the episodes with a pair of sunglasses on, though it’s never as egregious as the infamous “Long Night” episode on Game of Thrones.

The calculated camera angles combined with this peculiar lighting choice help sell the recreated world of Westeros — and King’s Landing, in particular — to old veterans and new fans alike. House of the Dragon shares the same continuity with its predecessor after all, so you’re going to see a lot of familiar places, even brazen callbacks that basically bring certain Game of Thrones découpage compositions back from the dead.

There are so many ways House of the Dragon could’ve gone wrong, but thanks to Ryan Condal and his team’s dedication to Martin’s world, and the creator’s own counsel, the show will manage a smooth landing without ruffling any more feathers after the controversial final season of the original.

That being said, it’s still difficult to interpret House of the Dragon as anything besides an extension of everything that Westeros has become famous for, reworking all of those familiar concepts with a fresh coat of paint to justify its existence, and not too subtly at that. Maybe it’s the humdrum, maybe it’s the times we live in, but despite dragons being aplenty and the story not shying away from an expensive battle sequence, the show still fails to soar as high as Game of Thrones did once upon a time.

An Awesome Bruce Willis Movie Has Been Dominating Netflix All Week