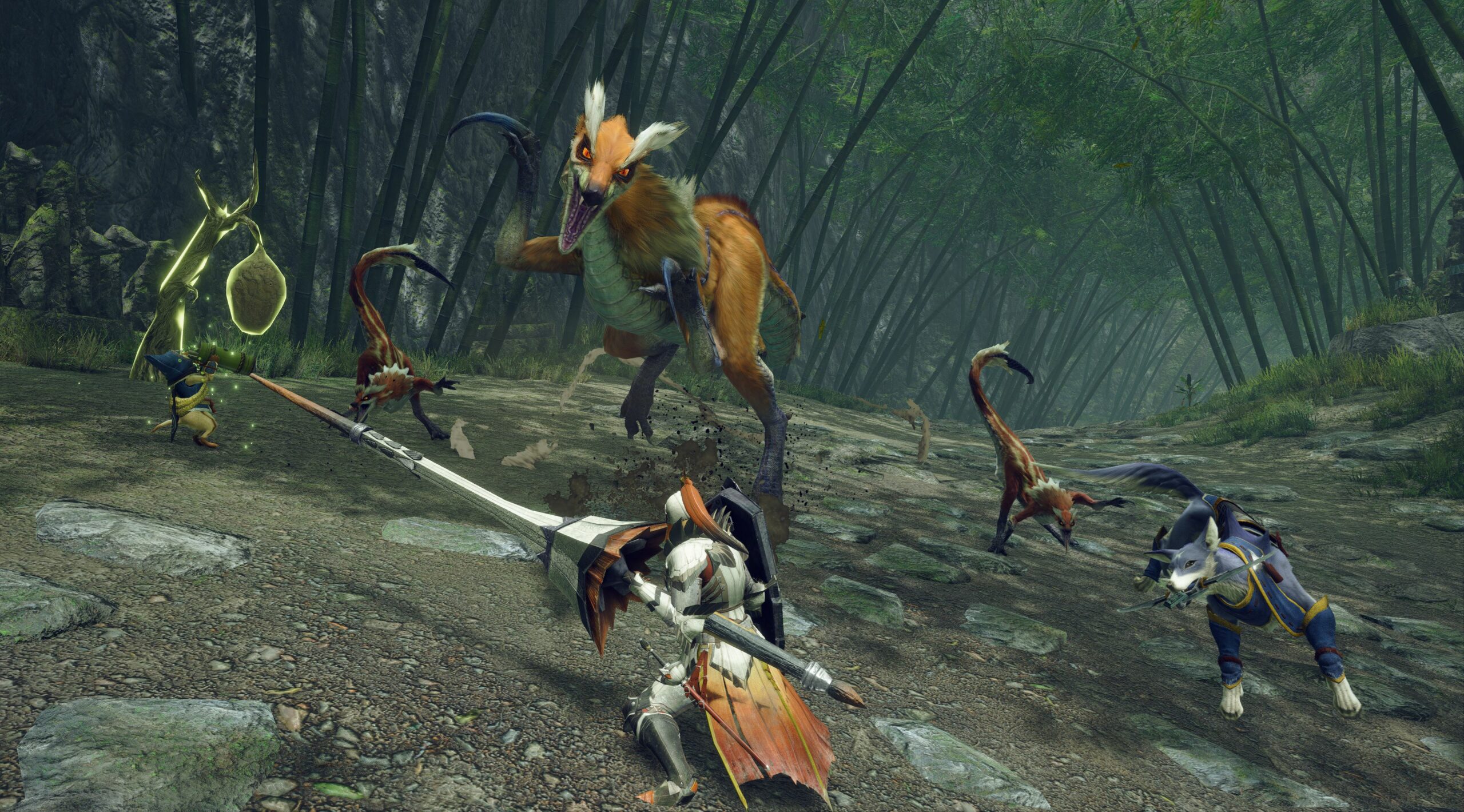 There’s only one feeling that adequately describes Monster Hunter Rise on PC when compared to its Nintendo Switch counterpart. That feeling is speed.

That being said, the most tragic part of playing Monster Hunter Rise on PC is that I couldn’t import my save file from my Switch. I didn’t think this would be a huge deal — I’d simply choose a different weapon and the game would change dramatically enough that fighting the same monsters all over again would be fresh and fun. On this point, I was correct. However, what wasn’t fun was gathering a bunch of like, mushrooms and dingleberries for the townsfolk so I could unlock the necessary facilities to rake in extra materials and travel around each map quickly. That part sucked.

Luckily, it wasn’t more than six or eight hours before I was up and running again in High Rank at a blazing, silky smooth, creamy 144 frames per second. Load times? Never heard of ’em. Compared to the eye-straining 25 to 30 fps of the Switch version, this is just heaven. The animations of monsters flailing about are much easier to appreciate when they don’t look like they’re being displayed by a zoetrope.

What’s more, there’s a ton of customization as far as settings and controls are concerned. I even found button prompts that match up with my DualSense controller, something I think I’m yet to see from any other next-gen port thus far. There are even distinct DualShock 4 button icons if you prefer. No longer do I get mixed up between the X and Y inputs of the Switch pro controller. It’s all triangles and circles for me, baby.

I was having a good time in Low Rank, the game’s “normal mode” quests that occur before you’re seasoned enough to join High Rank quests — variations of monsters that hit harder, move faster, and have extra attacks. Once I got into High Rank again, I remembered the real pull of Monster Hunter Rise: grinding obscure parts to make stat-boosting decorations and crafting layered armors for fashion purposes. I was hooked.

Matchmaking is also a treat, as the player population at the time of writing this is a whopping 100,000 players (according to Steam Charts). Combined with the fast load times, it’s never been easier to hop in and help new or veteran hunters slay this or that for some extra materials and fun. It’s easy to get caught up in the “end game” grind not having quite the robustness of World’s Guiding Lands, but you’ll have to remember why Monster Hunter is such a hit: it’s fun to relax and play with strangers. I’ll usually come home from my day job, throw on a podcast, and knock out a few hunts with others for extra rewards.

Sending stickers of cats to each other during online hunts was the only real form of communication in the Switch release, but now there’s a bespoke chatbox. This worried me, but so far everyone has been amicable enough (the worst hazing I’ve seen was a befuddled “wtf”). The community, as always, is welcoming, patient, and chill.

Writing this, I’ve spent about 30 hours with Rise thus far, and am heading into the post-launch content, starting with the Elder Dragon Chameleos. I’m excited to pick up essentially where I left off in the Switch version, and see all the content and collaborations I missed out on. There’s a real value proposition here if you’re like me and dipped out in lieu of waiting on the PC release. If not, I’m not so sure. Switching weapons essentially transforms Monster Hunter Rise into a new game, but you’re still going to be saddled with all the busywork quests necessary to unlock extra subcamps, canteen ingredients, etc.

But hey, this is a review of the port, I’m just trying to help our more cross-platform readers make an educated decision on how to spend their time. The port is excellent, having all the content ready to go is awesome, and I’m very much looking forward to preparing for this Summer’s release of Sunbreak. Honestly, having the G-rank release right around the corner is making the repetition a lot easier to swallow. At least, at the end of the day, all the grinding will pay off in a few months.

All told, it’s a great port of a fantastic game. I think Monster Hunter Rise stacks up to World as a mainline title – erring on the side of dumb fun over narrative and fidelity pays off on replay. The upscaled textures look fantastic, the settings menu is pretty thorough, and I’m pretty sure it would run on a toaster. Minus a save file bug preventing some people from being able to play, I think it’s as good a port as it can possibly be. Now I just have to lasso my friends into playing with me, somehow.

This review is based on the PC version of the game. A code was provided for review by Capcom.

Fantastic Fest Review: ‘The Banshees of Inisherin’ is a pitch black comic look at male friendship