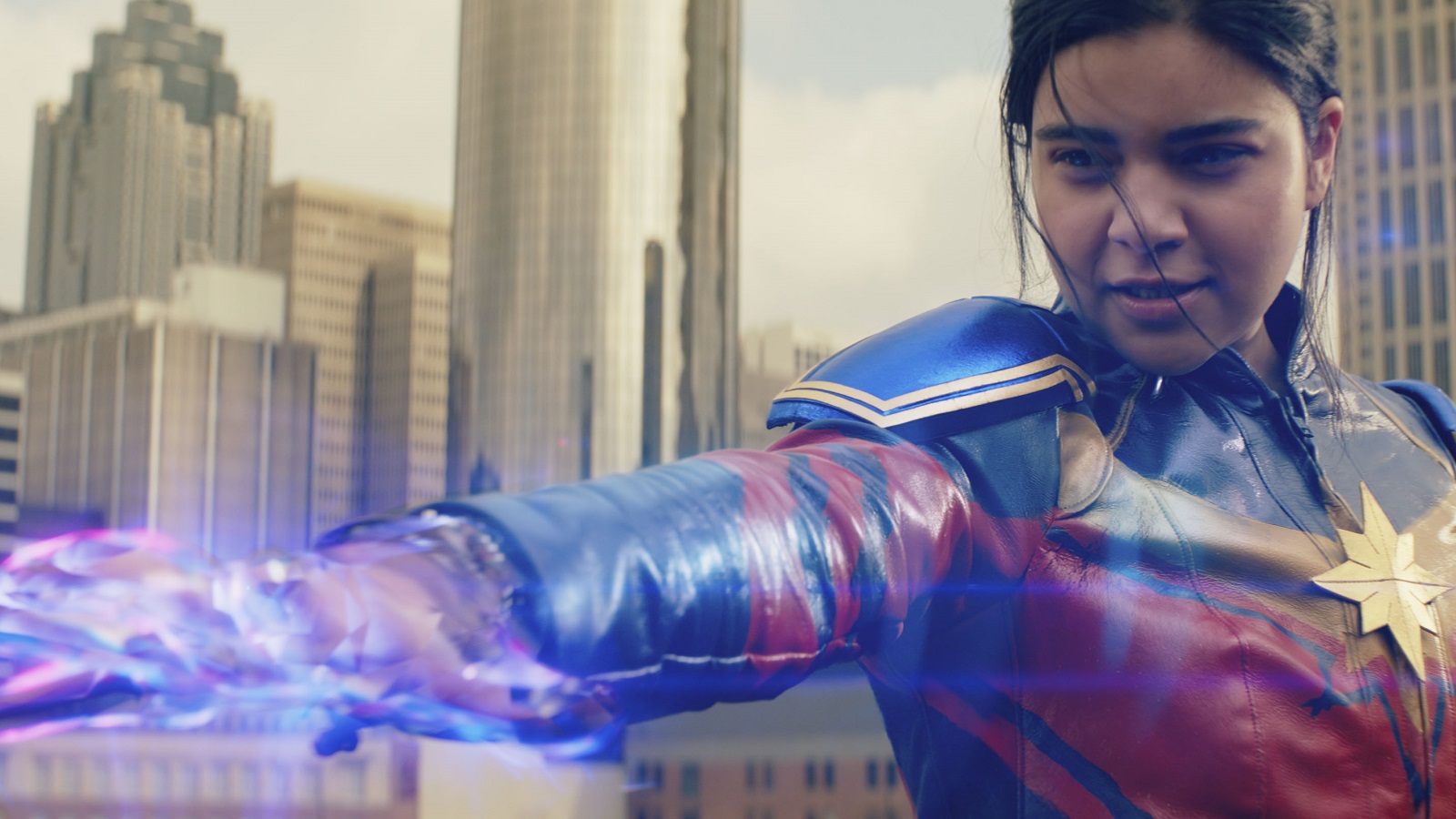 Based on the finale of Avengers: Endgame, the vast majority of the Marvel Cinematic Universe’s marquee names are familiar with (and wholly appreciative of) each other’s work, seeing as they banded together to defeat Thanos. However, until Ms. Marvel comes to Disney Plus tomorrow, we haven’t yet been introduced to a genuine superhero superfan.

Sure, Peter Parker and Kate Bishop might be in awe of Tony Stark and Clint Barton respectively, but fans have never met anyone quite like Kamala Khan. In essence, she’s the most self-reflexive audience surrogate in the franchise’s long and illustrious history; just like us, she’s followed along with the adventures of Earth’s Mightiest Heroes her entire life, except she lives in the world where all of these events unfold. It’s a fantastic entry point into the latest Disney Plus series, and it also helps immeasurably that Ms. Marvel is an absolute delight.

Based on the first two episodes that were made available for review, it won’t take long for people to fall in love with the MCU’s latest star, with Vellani proving to be a likeable, vulnerable, and completely engaging protagonist in what marks her first-ever acting credit. Scratch that; it’ll take mere minutes for even the most ardent of skeptics to be won over, such is the energy and enthusiasm she brings to a central performance every bit as vibrant as the show itself.

Right from the off, Ms. Marvel establishes a dizzying visual style that comes close to popping right off the screen, combining imagery with music to create a uniquely kaleidoscopic look at a corner of the MCU that’s never been visited before. Kamala is in essence the sort of high school hero we’ve seen countess times across every genre under the sun, but that familiarity (and our baked-in awareness of the in-universe lore) helps create an instant sense of immersion and comfort.

Kamala really wants to go to AvengerCon with her best friend Bruno Carrelli (played by the earnestly relatable Matt Lintz), but her parents don’t exactly share her same passion for costumed crimefighters and cosplay. Zenobia Shroff’s Muneeba is the sterner of the two, who’d much rather see her daughter uphold the respectable family values with which she’s defined her own life, and while he falls in a similar boat, Mohan Kapur’s scene-stealing (and occasionally hilariously giddy) Yusuf tends to extend a little more leeway.

Naturally, being a teenager and all, Kamala disobeys her parents and heads off to the fan fest anyway, but not before she makes a couple of last-minute adjustments to her homemade Carol Danvers getup. She may not realize it at the time, but the key element to her ensemble is a mysterious family heirloom plucked out of a storage box previously destined to gather dust in the attic; a bangle that ends up imbuing the youngster with unexplainable powers of energy construction, which manifest themselves at a moment that’s both ideal and unfortunate, depending on which character is caught in the middle.

Of course, much has been made over the change to Ms. Marvel’s powers and origins, but it works perfectly well within the context of the story. There’s no need for an overly-detailed explanation as to the who, what, where, and why of her newfound abilities (at least not in the first two episodes), but as the narrative progresses you can completely understand why Kevin Feige and creator Bisha K. Ali made the call that wound up offending so many comic book purists.

Events move at a brisk pace, but it never feels as though Ms. Marvel is rushing to get into the nitty gritty. That’s a testament to the top-notch writing from Ali and the second installment’s scribe Kate Gritmon, while Bad Boys for Life and Batgirl directors Adil El Arbi and Bilall Fallah are having a blast setting the stage for what’s to come through their inspired shot composition, fast-paced camerawork, and an evident sense of fun and enjoyment that seeps through every frame, creating an aesthetic that’s seamlessly picked up by Meera Menon in the subsequent chapter.

There’s not much of an overarching plot to be discovered in the first couple of hours of Ms. Marvel, but without going into spoiler territory, we can expect the machinations to truly begin in week three. The first pair of installments are all about introducing us to the cast, the roles they play, and how they factor into Kamala’s life, never mind the ongoing journey of the out-of-her-depth masked phenomenon trying to get to grips with powers that have not just changed her life, but turned her into an overnight viral sensation.

If that makes it sound like there’s an awful lot going on at any given time, you’d be 100 percent right, but Ms. Marvel isn’t overstuffed. If anything, we’re left wanting more. That’s not an easy balancing act when virtually the entire principal cast (bar Arian Moayed’s Spider-Man: No Way Home returnee Agent Cleary) are MCU newcomers, and that’s without mentioning that we’re also dealing with a superhero origin story, a teen comedy, a family drama, a potential romance angle, and the ways in which the title hero’s nearest and dearest have been impacted, influenced, shaped, and molded by their South Asian heritage, which in turn plays a huge part in Kamala’s ongoing trials and tribulations.

It’s also another significant step forward for the MCU in terms of representation, but that’s never the point the show tries (or even wants) to make. Ms. Marvel is a massively enjoyable and confidently charming slice of escapism, one that just so happens to feature a predominantly South Asian cast and creative team telling an arresting, eye-catching coming-of-age story from their perspective.

Kamala is basically the entire fandom in microcosm, in that she’s someone to have grown up admiring and idolizing the Avengers, but she finds herself in the scarcely-believable position of perhaps letting herself fantasize about actually becoming one of them. Based on the first two episodes of Ms. Marvel, everyone’s going to be cheering her on in the hopes that her dreams come true.