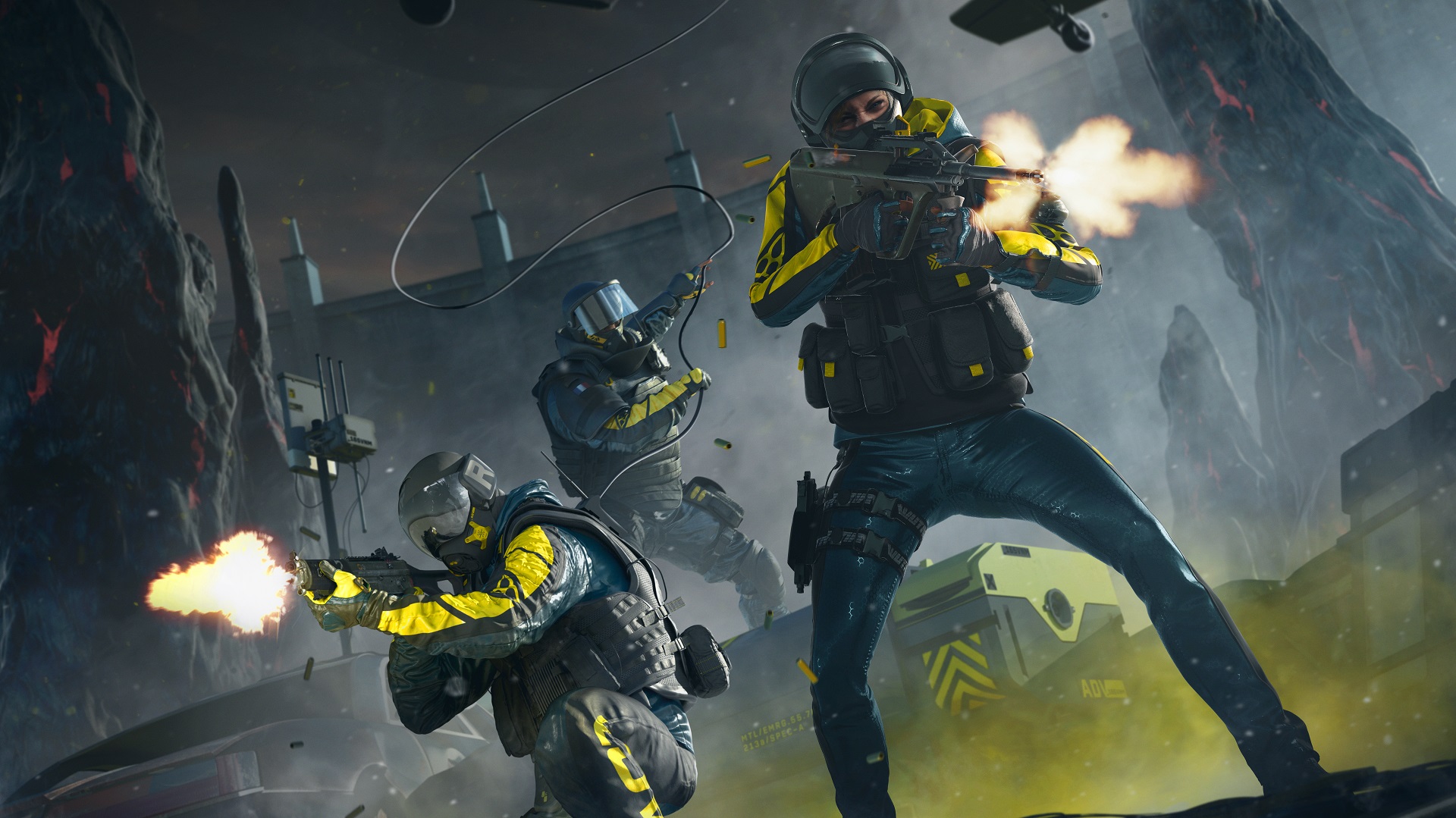 I’m going to be honest, my eyes glazed over mere moments into the opening cutscene of this one. As a connoisseur of mid-co-op PvE shooters, I’ve seen it all — the horrifying, unforgiving atmosphere of GTFO, the whacky and diverse excursions of Deep Rock Galactic, or the bland re-hashing of the legendary Left 4 Dead, Back 4 Blood. I really enjoy Rainbow Six Siege’s slow-paced and thoughtful gameplay loop, so I was excited to see how it could be utilized in such an environment. But when I saw the Statue of Liberty’s head get popped off by some kind of black goo I rolled my eyes. I immediately knew this was going to be another gutless, apolitical, vapid exercise in monotony. I was right.

Rainbow Six Extraction is… hollow. The main loop breaks down like so: enter a map with three distinct sectors alone or with two others, complete a randomly assigned objective in each, and either leave or continue on to the next. There’s a sort of appealing risk-reward dynamic in whether to keep trucking on or back out early between objectives, but the choice was usually relatively easy to make. Never did I feel like we just may be able to get by — after a few sessions it was clear whether we were going to get creamed or not should my squad continue on.

The threat of Extraction is the Parasite. Yep, just “the Parasite.” Incredible. “Something something our nation is under threat, we need to send in our most bestest boys, yadda yadda yadda. Something about a VR environment for training” – look, I just could not be bothered to parse the lore after they named the enemy the Parasite. The phoned-in quality of Rainbow Six Extraction is evident by the title screen, and I was just ready to jump in and shoot my gun at things.

Fortunately, the shooting is pretty good because — surprise — it’s just Rainbow Six Siege. It would be like if Overwatch or Team Fortress 2 took those kinda fun seasonal PvE game modes, repackaged them with a few new horribly boring maps and random objectives, and sold them for $40. It’s actually kind of mind-boggling.

I think the real lack of depth comes from just how simplistic levels can be. Whether it’s killing a few targets, finding some little fleshy tumor things and shooting them, or defending a point, it just never feels nearly as dynamic as it should. Enemies will sort of lumber around, but they go down pretty quickly. Some of them shoot, some of them explode, and they all look almost exactly the same. About the only interesting enemy mechanic is “nests,” which spawn more frequently unless destroyed and are found literally everywhere. Stealth, at least on more moderate difficulties, is a non-concern as long as your team knows how to aim. So it all sits somewhere between the butt-clenching stealth tactics of GTFO and the robust dynamism and fun of Deep Rock Galactic. And it’s boring.

Gameplay is lifted straight from Rainbow Six Siege which left me begging the question — how was the development time spent? Maps are largely bland (and ugly), enemies are boring to fight and very rarely provide the thrills of normal human-controlled Operators, and the progression system is laughably stilted. If the guns, gameplay, and characters (and even most of the content, since a large portion is recycled from Siege’s Containment event) were already here, what took four years? Extraction honestly could’ve, and should’ve, been a free update to Siege.

The biggest issue here, and it’s one that’s kind of nebulous and will certainly vary from person to person, is the feeling of listlessness the game leaves me with. When I drop into a map, I simply have no drive to keep going. Unlike similar games, where secrets could be hiding around any corner, or a surprising combination of enemies can really give you a run for your money, Extraction just feels trite. I can’t put into words why Left 4 Dead is still appealing after all these years, but it sure as hell doesn’t have anything to do with its story or what kind of phone charms you can hang on your gun.

On that note, the progression system is like a battle pass of cosmetics and meaningful gameplay upgrades rolled into a single bewildering package. Complete challenges and you’ll level up, earning cosmetics, new levels, and gadgets. There’s not much rhyme or reason to what you’ll be unlocking — it’s like a spreadsheet-driven drip-feed of goodies and gizmos that just fall into your lap as you play. And in case you were wondering, yes, there are microtransactions.

Operators level separately to this challenge-based progression, and if they’re wounded in a mission it takes time for them to heal back up. If they’re downed completely, they’ll get coated in a hearty helping of AB foam and you’ll need to retrieve them on your next run-through of the map. This forced me to play Operators I wasn’t entirely comfortable with, and it reminded me a bit of Darkest Dungeon’s stress management mechanics. It’s also a good way to ensure players are leveling multiple Operators, rather than just mainlining their favorite. Yeah, this mechanic is pretty good.

This all probably sounds overly negative and honestly, maybe it should be. I truly believe Rainbow Six Extraction has no legs, even with the “free” inclusion in Xbox Game Pass. If what’s on offer is the effort of the developers after a lengthy development time, I don’t foresee any meaningful content drops or changes coming any time soon. This particular market is (thankfully) becoming saturated with better games. If you want my advice, pick one of the many I mentioned anywhere in this review and play that instead.

This review is based on the PC version of the game. A copy was provided for review by Ubisoft.

Review: ‘Ambulance’ Takes Michael Bay Back to Basics for His Best Movie in Years