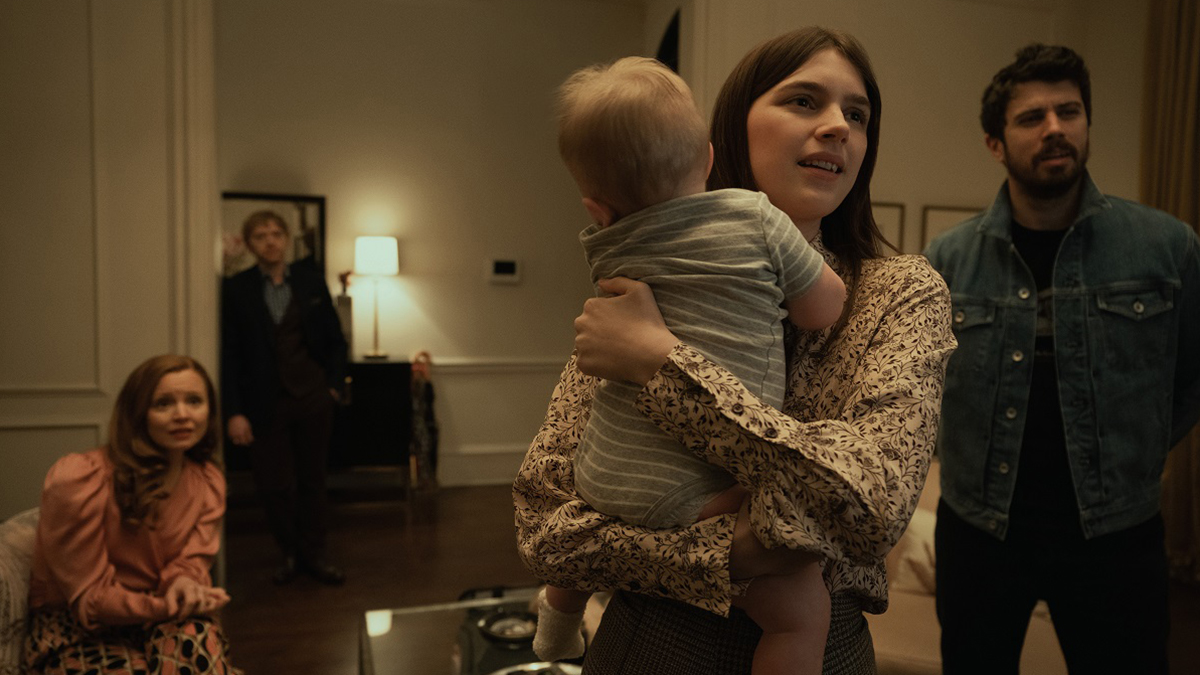 As Servant advances into season 3 with all its tonal ideocracies intact, audiences may start to question that pedestrian pace. There is no doubting the ensemble cast which includes Lauren Ambrose, Toby Kebbell, and Nell Tiger Free, but some may wonder when its tension tightening whistles and bells will amount to something. Sinister sound design, marauding members of the great unwashed, and moth-coated corpses only get viewers so far. As audiences peek in from outside, soaking up the muted mayhem, high-end culinary creations, and psychological episodes, something needs to give.

What does happen in terms of story over this season is debatable. Rupert Grint continues to scorch the screen (and bury Ron Weasley six feet under) as Julian, a morally questionable and ethically ambivalent family member with numerous agendas. Cloaked by a subtle American accent, he disappears beneath the surface of this character, imbuing his creation with recognizable foibles which imply hidden depths. After three years of breathing life into him, this feels more like a second skin performance from the Harry Potter alumni, and one that should have garnered him more recognition by now.

Elsewhere the dynamic between Sean and Dorothy fluctuates, defined as much by their interactions with Leanne as with each other. Kebbell remains exacting in his portrayal of development chef Sean, while the show itself employs camera angles and squeamish sound design to hammer home its point. Food is effortlessly lit and awkwardly appetizing, while the precision of his preparation acts as a counterpoint to rising tensions. Time is taken in the dialogue to emphasize ingredients, combine alcoholic accompaniments, and maintain a sheen of normality. This approach distracts from any other sense of narrative progress, even when paranoia and unwelcome interlopers impact later on.

In opposition to that is the superficiality of Dorothy, portrayed with an array of anxiety symptoms and nervous tics by Ambrose. Her persona is based on public opinion and changes just as frequently. Much of her performance hinges on suppression of self, as she fights to figure out what parts of her would play best from minute to minute.

Defined by television and driven to the point of self-destruction, this is a family of individuals. Dominance can shift either way in a moment, while successes rarely get celebrated. That is why Servant remains interesting, purely because it refuses to conform to expectations, either in terms of genre or storytelling conventions.

Nowhere does it deviate more than in the portrayal of Leanna Grayson, who proves more complex than a Chinese puzzle box. In bringing this character to life, Free taps into an inherently ethereal quality, that finds her perpetually detached from people. Through much of this season, her convalescence is front and center, as she recovers from psychological trauma. Outsiders are treated with suspicion, open doors leave her feeling vulnerable, while efforts to go outside become increasingly problematic.

Tension-soaked set pieces incorporate flashbacks, linger on open doorways, and focus on dark corners while Leanne fights an urge to run. Any flaws which occur in Servant have much to do with this overemphasis on tension, as sustaining it does not necessarily translate into momentum. For all the solid character work on display throughout, season three also feels stretched in terms of story. Even after two hours of television, it remains the performances which will keep audiences interested, not necessarily any given outcome.

M. Night Shyamalan, who created this series alongside Tony Basgallop, always said that Servant was designed to run for five seasons. Conjured up during the pandemic and limited to one brownstone location, it retained the feel of a stage play whilst keeping expectations manageable. In that first season, it struck a chord with people who were stuck inside and also unable to leave. Self-reflection, suspicion and paranoia suddenly became feelings people could openly identify with. Servant had allowed audiences to connect and share a commonality, without feeling judged or in any way inferior.

With its recent renewal for a fourth season, it would seem there is still an interest beyond the COVID-19 landscape for this type of tight-knit drama. In many ways, this roll of the dice from the people who brought us the iPhone has been instrumental in bringing back M. Night Shyamalan. Since Servant, he has gone on to write and release Old and is now working on another feature film. Whatever audiences may think of this up-and-coming third run, it proves that the proliferation of streaming content can sometimes have a positive effect.

Peter Jackson’s Beatles Doc ‘Get Back’ Sells Out IMAX Screenings