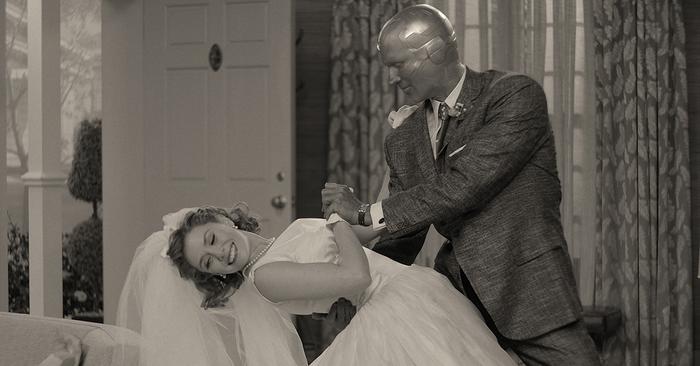 If you’re on any kind of social media, you’ve probably already seen the plethora of memes, fan theories, and video clips from Marvel’s new television venture, WandaVision. The series, which is now streaming on Disney+, is a fresh way of storytelling that I’ve never seen done before (and I watch a lot of TV, so trust me on that one).

I won’t give too much away, but set three weeks after Avengers: Endgame, the story follows Wanda Maximoff (Elizabeth Olsen) and Vision (Paul Bettany) living a sitcom life in the suburbs of New Jersey that Wanda supposedly created in order to cope with the loss of Vision in the previous film. The show plays with different sitcom-style throughout, and while it takes the filming style and dialogue from each type of show, I’m here to talk about the best fashion moments.

As each episode transports you to a different time period, the series is quite literally a costume lover’s dream. In an interview with Entertainment Weekly, head writer Jac Schaffer explained that “The show is a love letter to the golden age of television.” After watching the series weekly, I can agree that his stance stands completely true. And as someone who looks to older TV shows constantly for fresh fashion inspiration, it was a marvel to watch something that incorporated some of my favorite time periods of fashion into one show and put so much effort into matching the aesthetics and details of the era it was mimicking. As vintage trends become more popular in the mainstream, I felt full-on inspired by each costume the characters wore throughout the series.

The show’s costume designer Mayes C. Rubeo already has experience in the MCU (Marvel Cinematic Universe) with her design for Thor: Ragnorak, so I expected nothing less than greatness from the Mexican designer. While you’re waiting for the last episode to air on March 5, take a look below to re-admire the best fashion moments from the series. I even included shoppable options (both new and vintage) if you feel like re-creating the looks.