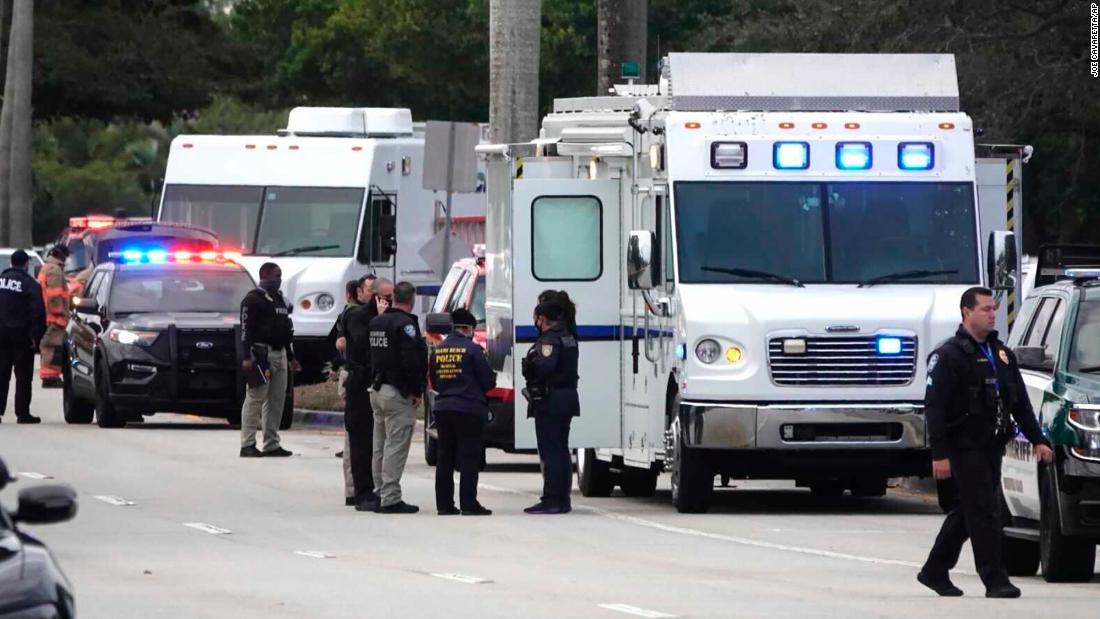 The subject of the warrant is dead, the FBI said in a statement.

The shooting occurred at about 6 a.m. as a team of law enforcement officers executed the federal court-ordered search warrant as part of a violent crimes against children case, according to a statement from FBI Miami Special Agent Michael D. Leverock and spokesman Jim Marshall.

Two agents with multiple gunshot wounds were taken to the hospital and are in stable condition, officials said. The third injured agent was treated at the scene.

“Every day, FBI Special Agents put themselves in harm’s way to keep the American people safe. Special Agent Alfin and Special Agent Schwartzenberger exemplified heroism today in defense of their country,” he said in a statement. “The FBI will always honor their ultimate sacrifice and will be forever grateful for their bravery.”

The shooting took place at the Water Terrace apartment complex, an upscale gated community outside Fort Lauderdale, at 6:04 a.m., according to Sunrise Police spokeswoman Otishia Browning-Smith. The person who officers were looking for had barricaded himself, she said.

The shootout, one of the deadliest in FBI history, brought a major law enforcement response to the area.

Video from CNN affiliate WSVN shows an ambulance driving from the scene to the Broward Medical Examiner’s Office at about 10:30 a.m., escorted by a group of law enforcement officers on motorcycles. Once there, a body on a gurney draped in an American flag was wheeled into the building as a line of officers saluted.

The FBI said its Inspection Division is investigating the shooting.

“The review process is thorough and objective and is conducted as expeditiously as possible under the circumstances,” the FBI statement said.

Schwartzenberger had been an agent since 2005 and moved to the Miami bureau 11 years ago. She is survived by her husband and two children.

Alfin joined the FBI in 2009 and came to the Miami office in 2017. He was married with one child.

“They were valuable members of the FBI and will forever be heroes,” Piro said. “Our chosen profession is fraught with danger. Today this grim reality has taken two of our best from our family.”

The name of the suspect will not be released until the next of kin are notified, Piro added.

President Joe Biden expressed his condolences to the families of the victims on Tuesday.

“My heart aches for the families,” he said. “They put their lives on the line and it’s a hell of a price to pay.”

The FBI Agents Association (FBIAA) offered condolences to those injured and said the search warrant was in connection with suspected possession of child pornography.

“These Agents were working to protect the most vulnerable in our society. FBIAA stands with the Agents’ families and pledges our support to them during this difficult time,” FBIAA President Brian O’Hare said in a statement.

Tuesday’s mass shooting marks the first time since 2008 that an FBI agent was fatally shot on duty. In that case, Special Agent Samuel S. Hicks was shot and killed while trying to serve an arrest warrant in a drug trafficking case at a home near Pittsburgh.
The Sunrise shooting is also similar to a deadly firefight 35 years ago outside Miami that was a turning point in the FBI’s history. On April 11, 1986, two violent bank robbers being pursued by FBI agents opened fire with high-powered firearms, killing two agents and wounding five others before the suspects were killed.
In the aftermath of the shootout, the FBI issued special agents with semi-automatic handguns rather than revolvers, changed its firearms training, and studied the psychological impacts of being shot at, former FBI deputy director John S. Pistole said in 2006.
In 2015, a new federal building in Miramar, Florida, housing the FBI Miami Field Office was dedicated the “Benjamin P. Grogan and Jerry L. Dove Federal Building,” named for the two agents who died that day.